As most of the contributors know, the first batch of books have already been shipped and the majority have already been delivered. I apologize that there were notes included - they were shipped directly from America by my loving mother.

I have been busily preparing all the shipments for the second batch, and it has been a nightmare of a project indeed. Nonstop drawing and writing little messages on the packages. And rather than do a simple mail-merge on open office, I decided it would be nice to hand letter the address on each package...that got old somewhere after number 70 or so. Here are some pictures to immortalize the moment. Hopefully by the end of the week all contributor copies, preorders and kickstarter backer copies will be out. 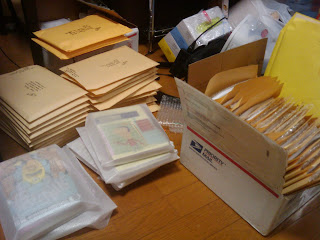 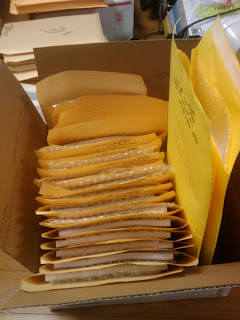 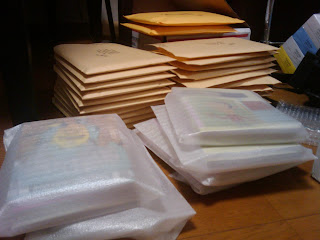 After the terrible events of March 11th, 2011 the entire world has sat glued to their television sets, waiting with bated breath for the other shoe to drop. We are all affected - we are all tsunami victims. We all share the helpless feeling of being trapped in the waiting room, unable to do anything to help.

What is the artist role after such a disaster? Without medical skills, or search and rescue experience, what sort of assistance can we offer. Sympathy. Solidarity. Hope.

Aftershock is about restoring hope. Aftershock is a collective project from creators around the world, sharing their thoughts, feelings, condolences, experiences and memories of the nation of Japan. The proceeds of this book will be donated to rehabilitating and rebuilding disaster struck areas of Tohoku and Kanto.